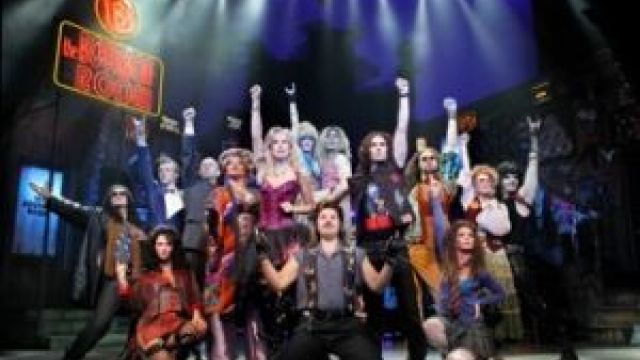 Rock of Ages rocked into Brisbane last night and judging from the audience response it’s a genuine bonafide hit! Pedalling 80s kitsch, with a catalogue of the greatest rock hits of the 80s, the stage was awash with smoke bombs, lycra and glitter.

A jukebox musical which is a cross between a musical and a rock concert, a terrific cast delivered powerhouse vocals accompanied by a kick-ass band fronted by Dave Skelton. The plot, as thin as a guitar string, has an L.A. Rock club threatened with closure until the developer has a change of heart and lets his son follow his dream. This is mixed with a boy meets girl scenario where a small-town girl comes to Hollywood to find fame and ends up as a stripper, and a musician who wants to be a rock star ending up as a pizza delivery boy.

The hokey story was saved by Brent Hill as Lonny the narrator, whose asides cleverly and wittily deconstructed musical theatre conventions.  Amy Lehpamer and Justin Burford did great as the couple in love, Michael Falzon, with his big-hair was a charismatic front-man for the story’s band Arsenal, Lincoln Hall as Franz, the German son, got all his laughs, with David Whitney and Rachel Dunham making their marks as the father Hertz, and Justice, mother hen of the strip club. With its song-stack including; “Don’t Stop Believin’”, “Hit Me With Your Best Shot,” “We Built This City,” and We’re Not Gonna Take It,” Rock of Ages is going to please not only the baby boomers of the 80s but also today’s Gen X and Y.

Our interview with Amy Lehpamer

Our Interview with Rodney Rigby