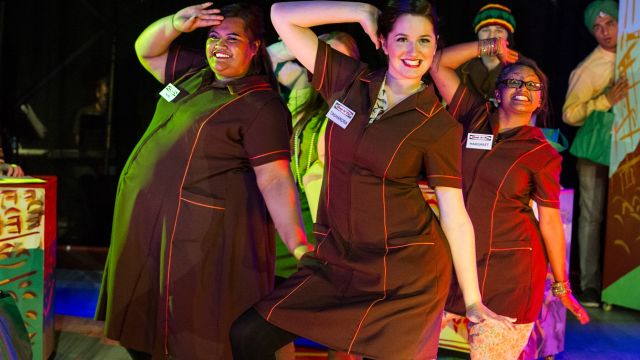 The Invisibles by Dan Bain and Luke Di Somma

At the beginning of her final year at rugby obsessed Riverhole High School, Lauren, a budding singer-songwriter, meets new arrival, rugby star and former dancer Scott, and attempts to enlist him in the annual nationwide music competition BandSmash.

A fast paced, high-energy musical comedy that celebrates loving your job. In her bid to save her locally owned struggling supermarket, Tashandra enters into the Checkout Operator of the Year Award.

A riotous reworking of Shakespeare’s Hamlet that puts Ophelia centre-stage.

In an allusion to Greek and Elizabethan theatre, three Fates realise they have forgotten how to have fun, so they reawaken their playfulness by having teenager Hugo fall in love with Verona, a young Italian girl.

A group of lost orphans flee south to escape bulldozers causing destruction and desolation, but are their assumptions about what is going on in the world correct?

Emma Rose and the Enchanted Forest by Jon Gadsby

Emma Rose and her horse Smuggler head into the Enchanted Forest on a quest to heal Smuggler’s sore tummy.

The Wonderful Wizard of Oz and The Snow Queen by Jenny Wake.