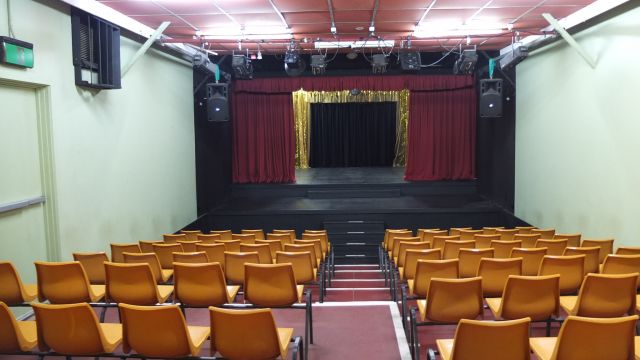 Thespians are flying the flag in the most remote parts of Australia. To celebrate the resilience of community theatre David Spicer spoke to companies in Alice Springs, Kalgoorlie and King Island.

They breed them tough in Alice Springs. In the dead centre Australia, in the middle of the desert, a theatre company has been ticking over for eighty years.

The Alice Springs Theatre Group even has its own venue, called the Totem Theatre (pictured left).

“It is pretty basic. A shed with the seating on stepped concrete with racks of plastic chairs,” said the Alice Springs Theatre Company’s Treasurer Ben McIntyre. “The theatre is not even insulated and gets quite hot and cold. Dust blows in as well.”

The Totem Theatre stands proud at the bottom of Anzac Hill. The venue is comprised of two tin sheds, originally built during World War 2 when the military planned to abandon northern Australia in the event of a full-blown Japanese invasion.

Sitting next to the theatre is another tin shed holding the company’s store of costumes and props. There is a green room out of the back, which is a four metre shed.

Both buildings are owned by the local council but Ben admits that the company is only getting around to signing a lease.

With a population of 30,000, and 1500 kilometres from a major city, the Alice Springs Theatre Group has its market cornered.

“We don’t have any (competition) apart from various touring shows, such as Bell Shakespeare, which book our entertainment centre at Araluen.”

As such, the Totem Theatre’s 100 seater is in demand. It’s booked out for youth drama, poetry readings and variety nights. 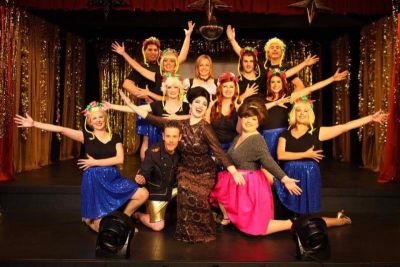 The Alice Springs Theatre Company itself stages one or two musicals a year. It goes for shows that are on the quirky side. Recent productions have included Urinetown, Young Frankenstein and, late last year, the world community theatre premiere of Song Contest: The Almost Eurovision Experience (cast pictured right).

In Song Contest, where the audience votes for its favourite act, the team from Sweden proved most popular with locals.

“We generally have sold out runs. It is easy to get the message out by putting posters up around town, using local community radio and the town’s only newspaper.”

The members of the company come from diverse backgrounds.

“I am a database developer, our president is a social worker, our secretary works in a coffee shop and we also have professional actors who have worked on various productions around the Northern Territory.”

But Ben laments that “a lot of people don’t stay around” Alice Springs for long. Many workers are on one to two year contracts. He considers himself a local, having lived there for ten years.

The company’s next big project is helping Council get a grant to insulate the theatre from the heat, cold and dust.  Working out of a heritage building means they have some hurdles to jump over. In the meantime patrons will have to continue to dust themselves off when they need to. 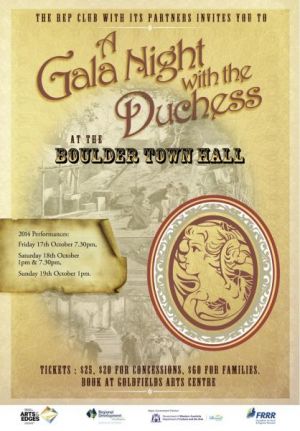 The gold mining town of Kalgoorlie, in the middle of no-where, in the bottom half of Western Australia has a rich theatrical history that it is proud to show off.

The Goldfields Repertory Club was founded in 1931 using the town’s beautiful ornate Edwardian town hall for its first productions. In the 1940’s the club converted Kalgoorlie’s only synagogue into a theatre. The biggest drama took place during the 1950’s when it burnt down. The rebuild included a wardrobe which club President Norma Latchford proudly describes as “the biggest in the state”.

You need plenty of storage for a busy theatre company when the nearest major town (Esperance) is 400 kilometres away. However Norma notes that “a lot of people have nostalgic feelings for Kalgoorlie and go to Perth to source things for us.”

Unlike other mining towns in Western Australia, it has not been affected by the iron ore boom and bust. An active gold mine has kept the population steady at around 30,000.

“Any time there is a problem in the world, people panic and hoard gold,” notes Norma.

The theatre company has struck a rich vein in recent times with lighter comedies and musicals.

“They are not going for serious dramas. Audiences want something uplifting rather than deep and meaningful. That is a trend all round Australia.”

“We did eight performances of Oliver! and it sold out. That was followed by The Strange Case of Dr Jekyll and Mr Hyde and it was half full. Our Christmas family pantomime is almost fully booked.”

The Goldfields Repertory Theatre Company does not have a monopoly on local entertainment. Another company, the Stage Left Theatre Troupe, puts on five shows a year and there is the regular touring circuit through the town.

A few years back the Repertory Club upstaged everyone. When a regional arts summit was held in town the company took over the town hall to stage the play The Duchess of Coolgardie, which was written in 1898 and set in a gold field. The immersive production reflected the theatre-going experience of Kalgoorlie in the same period.

“We did the whole thing as if it was the 1890s. In that time people didn’t just sit down nicely and watch. They would get up and have a drink, eat and talk to their friends.

“We had the choirs going in, brass brands that were popular in mining towns, and also indigenous dancers.”

Kalgoorlie was thirsty for entertainment in the 19th century.

“We had travelling troupes who came and made a lot of money because the miners would throw nuggets onto the stage.

“We did the same, asking the prospectors to donate some nuggets.”

These days the stages are no longer being flooded with gold but a rich theatre tradition is flourishing. 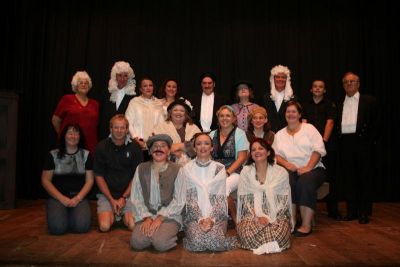 Anchored in the middle of Bass Strait, between Victoria and Tasmania’s north-west coast, King Island is not the place you’d expect to find a theatre company with a history stretching back almost a century. With a population that has swung between one and three thousand its endured periods of hibernation.

The King Island Players was formed in 1923 with the play Facing the Music, then folded in 1950, but roared back into life in the 1960’s when a school teacher staged a string of musicals including South Pacific.

The teacher could cast it because the island’s population had swelled to three thousand.

“They introduced TV to King Island so they faded out,” she said.

A new golden era commenced from the mid-90’s, even as population of the island, mainly used for Dairy, dwindled to just over a thousand. 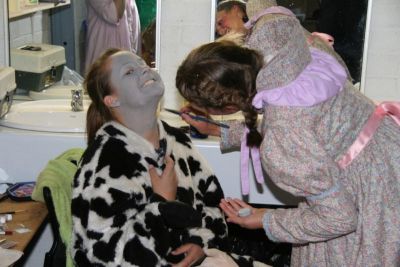 Shirley directed over 16 productions. Theatre restaurant comedies by Judith Prior were most popular, particularly when timed to coincide with major racing and show events that bolster the small island’s population from time to time.

Shirley would get cast from “off the street” and often have to use the same people in different productions.

“I worked that hard I got pneumonia. I was absolutely exhausted.”

With such a small population, the club President found herself doing absolutely everything.

She is however optimistic that the King Island Players will grace their town hall again.

“The money is locked down. Just waiting for someone to come along to do it.”

Originally published in the January / February 2017 edition of Stage Whispers. 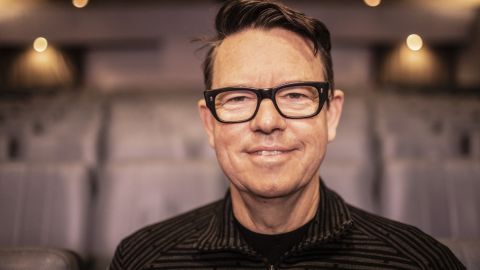