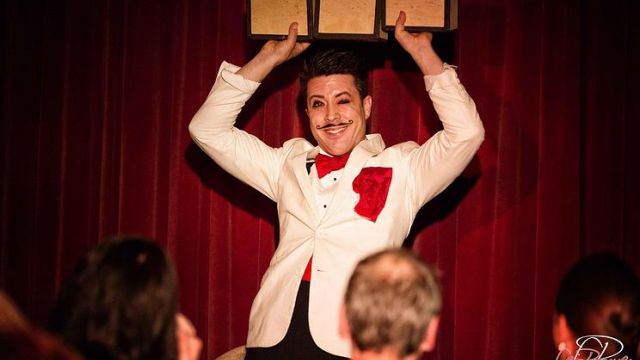 Daniel Gorski’s alter ego The Vaude-Villainous Mr. Gorski is proof that the Fringe caters to all ages. He is charismatic and manic as he barely takes a breath to deliver 45 minutes of sheer mayhem.

Dressed in an over-sized red pin-striped suit, complete with a painted on twirling moustache, he is not unlike a caricature of a gangster of yesteryear. Police sirens grab your attention as he madly enters the performing space; he is wanted by authorities for being outrageously funny.

Capturing the attention of the audience with outlandish slapstick, he evokes much laughter from the younger crowd. A cleverly choreographed routine and silly antics are well executed. Juggling bottles, glasses, balls, hats and just about anything else he can find, it is clear Mr. Gorski has mastered his craft.

The last part of the performance was dedicated to spinning plates on tall metal rods. He asks the audience for encouragement in the form of clapping. Plates are spinning at different speeds with young ones not too afraid to scream out when plates look like they may fall. He manages to spin 6 plates at one time. A very clever feat and one I have not seen in a long time.

With an early start and only a short season get in quick to see this mad-capped villain entertain. The Last Time I Saw Richard

Two Brunettes and a Gay